Travelling from First Nation to First Nation, I am blessed with the ability to see great work developed by tenacious people. Specifically, the work I am talking about is the individual's effort put into promotion of the Native Languages. Whenever the topic is brought up, people say, "Oh, you should talk to David about his songs," or "You should see the talented pictures drawn by Casey." In many cases books have been already been put together and beautifully illustrated locally, lexicons have been indexed, songs have been translated and games have been created. Why then do Native Language teachers spend just over two hours per day creating their own content? I cannot imagine how futile a willing parent must feel if they want the language and culture to not only survive, but thrive in First Nation communities when they do not have the ability themselves to speak, read or write the gift of language. I believe a lot of material exists, we just do not see the potential, even though they are right in front of our eyes.

So in walks the white guy (me), claiming to be able to help those help themselves in this quest to revitalize their Native tongue. Why would they believe I could help, why do I believe I could help? I think the answer is quite simple, someone from outside the communities has different skill sets to bring to the solution. This is the model of diversity: different backgrounds and skills focussed on solving a similar solution. We all know the saying, "the definition of insanity is trying the same thing over and over but expecting different results." I believe by conditioning ourselves to look at ordinary things in a way where we question, "How can that be used, how can that be distributed, how can that be replicated, how can that be learned?" will present items and talents all around us in a light of boundless potential. This is how I am wired, I see things differently, I see anomalies, this is my gift. Let's look at my friend Bob Atwin. Bob was my main contact with First Nation communities in New Brunswick, he actually started as my 'watchdog' as he called it. He wanted to make sure I was true to my word and not just someone making money off of the language loss dilemma. Initially, I got the sense he was looking at me to fail rather than to help Nations succeed. One day, in his office, his gruff demeanor dropped, a kind tone came into his voice when he asked me if I knew how to read magnetic strip cards. Bob lamented that his mother had used them to record the Maliseet language word by word on these cards and he wanted to hear her voice again. As well, he desired the words be used in an education setting. I didn't even know what these cards were, and after Bob described what he was talking about, I still didn't have any idea so we dropped the subject. About a month later Bob asked me again. Out of frustration of not understanding, I asked him if I could swing by his house to take a look and this is what I found: 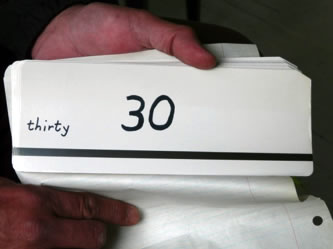 The card is basically an old mainframe computer card with a recording strip on it, like the tape in a cassette cartridge. The strip is about ten centimetres long and records around three seconds of content. People record words onto the card, then write the word on the card so it can be recalled. I took pictures of the magnetic tape cards and investigated a way to have them display their audio content. After a few emails and phone calls, I found a way to get the sound off of the cards. Bob heard his mother's voice for the first time in twenty two years. While in a hotel in New Brunswick, I hear a knock on my door and Bob appears. Bob is carrying a large cardboard box full of papers, notes, pictures, drawings etc. He explained later that this carton contained everything his mother has ever created for language class. He said, "I don't know why I am giving you this but I think there will be something in here you can use." I put the box down, Bob humbly walked away, what an enormous gesture.

Don't tell Bob, but I could hardly wait for him to leave so I could go through this box of treasures. Instead of keeping the contents, I took pictures of every document in the box and returned his mother's life's work back to him that evening. Then I set to work. I found a dictionary she had created from the 1950's through to her passing in 1989. She had travelled through Maliseet territory recording and indexing every word she could find. The most interesting thing to me was the writing style hadn't been standardized until after the turn of this century. This innovator was writing words phonetically for over forty years. I quickly set out to digitize the words, I put them all into an Excel spreadsheet, both Maliseet and its associated English pairing. From this dictionary, we have found over 400 words which have been previously thought lost.

After Indigitizing the Veronica Atwin word list, I sat down with a half dozen Maliseet linguists and Elders. They started firing words at me to see if Veronica had recorded them. I said the first few requests in Maliseet, then the old people started to laugh. I asked if my pronunciation was off, and they said it was nearly perfect. What they were laughing about was the fact they haven't heard these words spoken in over 60 years. They simply forgot the words. This predicament is hard for me to comprehend. If a German speaker, for instance, lost some words, they could go back to Germany to get them back. Native populations cannot do this, the words are thought to be gone forever. More importantly though, was the realisation that through the use of phonetics, we now have the ability to produce books where non speaking parents can now read to their children in the near forgotten tongue of their ancestors. So much of these gems exist in various communities, I'm just struggling how to find out about them and how they will be shared.